A surprising theatrical journey through the dream and the nightmare of a man moving between identities; a man who has everything yet nothing, who wants to belong but without feeling guilt, the right man in the wrong place. Torn between worlds.
The group’s journey is an invitation to the spectator to enter the composition of Israeli society; through an examination of the identity of the Israeli Jew and Israeli Arab, from within a reality loaded by stereotypes and traditional attitudes. Out of the mutual observation of the creators of the performance, Arabs and Jews, we have tried to examine how each of these societies is reflected in the eyes of the other. We become mirrors.

The performance touches on the split in the collective personality of Arab Israeli society. On the one hand adhering to Arabic traditional and cultural values, and on the other, a daily encounter with Jewish society revolving around its Western values and culture. Is it possible to live with such conflicting and differing values and cultures?
When they are totally bared, with much pain and humor the people of the Acco Theater Center and the Diwan Group try to come to terms with themselves, with society and with a changing and confusing reality. The event attempts to raise questions, with no pretension to offer answers. We ask questions, the answers lie in the future.

The night of Chalid’s marriage to Fatmeh his love from the village his attraction to another woman – a Jewish woman – gives him no respite. Svetlana a new immigrant from Russia and the object of his love is a soldier who checks his papers every day. Their love is conditional on his conscription into the army.
Chalid is recruited to the undercover unit whose members disguise them selves as Arabs receives a lesson on how to look and behave like an Arab and is posted to the territories. In the heart of the intifada he loses the apple of his eye.
Out of the darkness come back his past his family his Arab ness and finally his Arab wife in an attempt to get him to return home. She arrives dressed as a ‘Jew’ her perfume the perfume of the ‘Jewish’ woman but he refuses to accept her he wants her ‘pure’.
Thus our hero finds himself back at the starting point and all that remains for him and for us is to dream.

The performance “Arab Dream” was awarded four prizes at the 1996 Acre Festival:• Best performance
• First prize far Direction
• First prize for lighting
• Credit far musical content.From the reviews:”The performance is a dream trip of Chalid as he tries to find himself and his place. This is a very difficult journey in terms of content, and wonderfully beautiful in its staging. A very rich performance in its music, lighting, use of 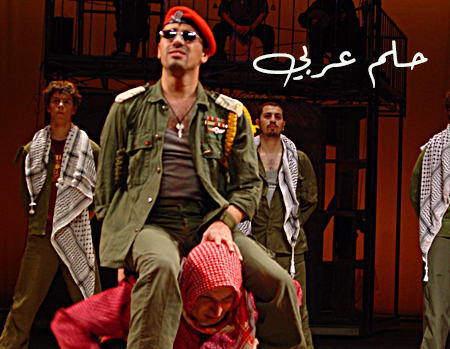